For What It's Worth

What the chirp of cicadas is to the Midwest, the topping out of the Fireweed plant is to Alaska: a harbinger of the end of summer. 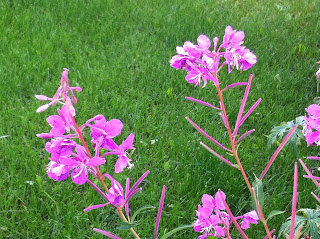 I love these God-made signs of the inevitabile cycle of time and change.  They bring to mind promises of God's providence and presence.  They are God's ways of saying "gather ye rosebuds (or Fireweed) while ye may..."  This God-authored drama of life and death is one in which we're privileged to have a front row seat.


But, human-made signs of inevitability have a different message and effect entirely.  They bring to mind threats of "my way or the highway," instead of promises of abiding presence.  They speak not of a cycle of time, but of the end of time.  We in the United States have a front row seat to such a human-authored drama.  This drama whose main characters are Revenue and Spending seems to awaken the less-than-better angels of our nature.  Regardless of which side one takes, it seems the financial well-being of our children and grandchildren demands a higher sense of self-sacrifice and service than we are currently witnessing and expressing at the current time.

I am a fan of old time radio programs which, thanks to Internet radio stations, I listen to on a regular basis.  I am especially fascinated by listening to the programs from the early years of World War II in which pleas for saving aluminum foil, eating less meat, rationing gas, collecting cooking fat, purchasing war bonds and sacrificing many creature comforts were woven into the plots of every show and their advertisements. I can't even imagine how such pleas would be heard today, nor can I feature any politician who still cherished her/his future uttering one.  Of what is this a harbinger?


Brothers and Sisters, may we turn to the gospel according to Buffalo Springfield?

What it is ain't exactly clear

There's a man with a gun over there

Telling me I got to beware...

Getting so much resistance from behind...

For what it's worth...there may be better ways...more difficult ways...ways of denial and sacrifice...but better, nonetheless.  Didn't I hear of One who said something about gaining life comes in giving it up...the first being last?  But, then again, He never had to be concerned about the next election cycle.

P.S.  For the benefit of those not as chronologically blessed as this writer, here's the entire musical reference: